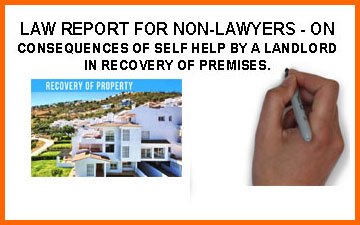 LAW REPORT FOR NON-LAWYERS – ON CONSEQUENCES OF SELF HELP BY A LANDLORD IN RECOVERY OF PREMISES.

FACTS OF THE CASE:

The dispute in the instant case arose between the landlord Prof. Akinkugbe and his tenant Chief Godson Ewulum. The landlord had rented his property at 53, Talabi Street, Ikeja, Lagos state, to the tenant.

The tenant as the chairman and Chief Executive of Ewulum Holdings Nigeria Limited was the very person who occupied the said leased property for more than three years.

The dispute between the landlord and tenant arose when the rent expired and the tenant failed to leave the property and hand over the keys to the landlord. The landlord then went to court to claim possession of his property. At the conclusion of the case, judgment was entered in favour of the landlord against the tenant.

Thereafter, the tenant was unhappy and went to court because the judgment was not in his favour. Later that day the landlord and tenant agreed that the tenant should hand over the keys of the property at the end of December, 1993.

However, before the agreed date to leave the property, the tenant went to the court again asking for more time and the permission to remain in the property for a further six months after the December, 1993 previously fixed for him to leave property.

The landlord’s contention against the request brought by the tenant in the case was dismissed by the court, the court decided to hear the tenant’s case for a date in Janurary, 1994.

The landlord however took the keys of his property from the tenant before the date fixed for the case in January, 1994.

The tenant reacted to the action of the landlord by going to court to seek the following reliefs against the landlord;

At the conclusion of the case, the court entered judgment in favour of the tenant and ordered as follows:

The landlord was not happy by the decision of the court and went to the court of appeal, where his appeal was rejected. Still unhappy, the landlord went further to the Supreme Court,

Where it was decided as follows: