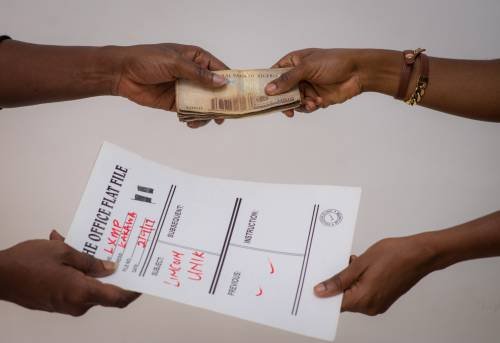 Temple Nwankwoala, a Deputy Superintendent of Police of the Nigeria Police Force, was in charge of the Homicide Section in the office of the Assistant Inspector-General of Police, Zone 5, Benin City. On or about the 26th day of October, 2006, in the course of the investigation of complaints of crimes against one Elder Alexander Okiye was offered gratification by the said Elder Alexander Okiye but failed to report the offer of gratification to any officer of the Independent Corrupt Practices Commission (ICPC) in Benin City or any Police officer.

Nwankwoala was arrested and was arraigned before the Edo State High Court sitting in Benin City, on a three-count charge bordering on the violation of the provisions of the Corrupt Practices and Other Related Offences Act, 2000. Nwankwoala pleaded not guilty, and the case proceeded to trial.

Can a public officer be sent to jail for failure to report an offer of bribe made to him?

The Court held that in respect of the charge which had to do with Nwankwoala’s failure to report the offer of gratification contrary to Section 23(1) of the ICPC Act 2000, the ingredients are, a. The offender must be a public officer. b. The public officer to whom the offer of gratification is made, must report same together with the name of the person who made the offer if known, to the nearest Officer of the ICPC or a Police Officer.  The Court further held that from the testimony of Nwankwoala, there was an offer of N500,000, it is immaterial whether or not he received the money, what is important or crucial is that he failed to report to a police officer or officer of the ICPC of the bribe to him in a matter relating to the duties and functions of his office.

The Supreme Court, therefore, dismissed the appeal and upheld the decisions of the two lower Courts.