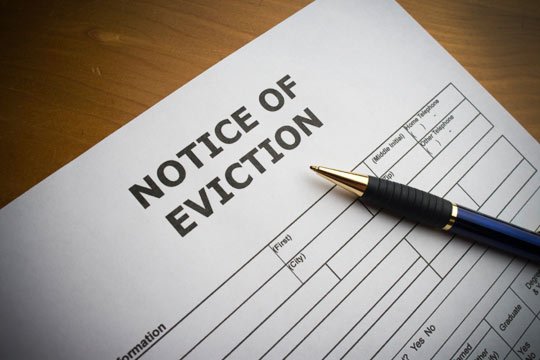 Professor Akinkugbe rented his property at 53, Talabi Street, Ikeja, Lagos State, to Ewulum Holdings Nigeria Limited. Chief Godson Ewulum as the Chairman and Chief Executive of Ewulum Holdings Nigeria Limited occupied the leased property. Dispute, however, arose between landlord and tenant, when at the expiration of the rent, Chief Ewulum failed to leave the property and hand over the keys to the Professor Akinkugbe.

Dissatisfied with the actions of his tenant, the landlord went to Court to recover possession of his property. At the conclusion of the matter, judgment was entered in favour of the landlord allowing him to recover possession of his property. The tenant on his part brought an application before the Court asking for more time before leaving the property. The landlord and tenant agreed that the tenant should hand over the keys of the property at the end of December 1993. However, before the agreed date to leave the property, the tenant went to the court again asking to remain in the property for a further six months, after December, 1993 previously fixed for him to leave the property. The landlord opposed this request by the tenant and asked the Court not to hear it. The Court, however, disregarded the objection and set January 4th 1994 as the date to hear the tenant’s application for more time.

Before the date fixed by the Court to hear the tenant’s request for more time, the landlord took laws into his hand, wherein by himself and without a valid Court order ejected the tenant from the premises. The tenant reacted to the action of the landlord by going to the High Court to seek the following reliefs against the landlord;

1. A declaration that his ejection from the premises was unlawful, same having been carried out with force and without lawful authority

2. An order directing the landlord to pay compensation to him and all expenses or loss he might have incurred.

At the conclusion of the case, the High Court granted the tenant’s reliefs.

Is a tenant entitled to damages where a landlord resorts to self help in the recovery of his/her premises?

The Supreme Court held that a landlord can take possession of a premises tenanted by him if he can do so peacefully upon the expiration of the tenancy. However, a landlord who resorts to self-help in a bid to recover possession of the premises tenanted by him runs foul of the law and he is liable in damages. The act of unlawful eviction of the occupants together with his properties was a clear case of trespass (unlawful entry) for which compensation ought to be paid by the landlord to the tenant.