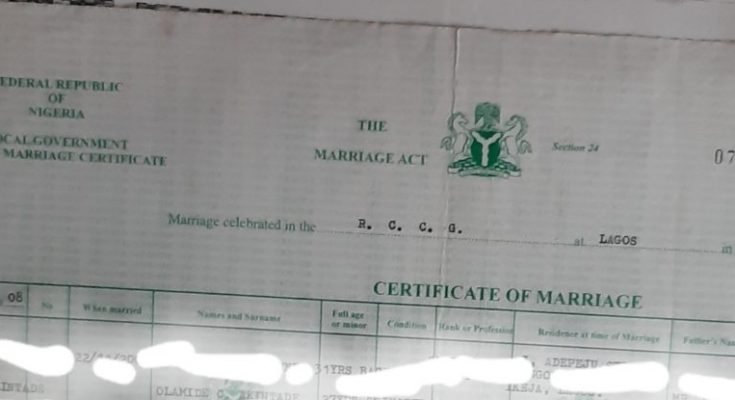 Mrs. Ifeanyi Obiozor commenced suit No. 0/506/2006 in the High Court of Anambra State at Onitsha against Baby Nnamua claiming that she is the legal wife of one Ozodinaobi Amaechi Obiora Obiozor and as such entitled to his estate at his demise and an order against Baby Nnamua to pay over to her, the rents of N30,000.00 already collected by Baby from the tenants at 37 Isiokwe Road, Onitsha.

Baby Nnamua on her part asked the Court to declare that she is the only legally married wife of the late Ozodinobi Augustine Obiozor that lived with him until his death and also asked the Court to declare the marriage between Ozodinobi Obiozor and Mrs. Ifeanyi Obiozor null and void for failing to meet the requirements of the marriage laws of Nigeria.

Dissatisfied with this judgment, Mrs. Ifeanyi Obiozor appealed to the Court of Appeal.

Effect of failure to obtain a certificate/license from a registrar/minister before the celebration of marriage.

The Court of Appeal stated that in the absence of evidence that the registrar’s certificate or a minister’s license was obtained and delivered before the celebration of marriage (even though not willful) will render the marriage void. Section 13 of the Marriage Act provides that- “The Minister upon proof being made to him by affidavit that there is no lawful impediment to the proposed marriage, and that the necessary consent, if any, to such marriage has been obtained, may, if he shall think fit, dispense with the giving of notice, and with the issue of the certificate of the registrar, and may grant his licence, authorizing the celebration of a marriage between the parties named in such licence by a registrar, or by a recognized minister of some religious denomination or Body.” S.22 of the Marriage Act provides that – “A minister shall not celebrate any marriage if he knows of any just impediment to such marriage, not until the parties deliver to him the registrar’s certificate or the licence issued under Section 13 of this Act.” S. 33 (2)(c) and (3) of the Marriage Act provides that- “A marriage shall be null and void if both parties knowingly and willfully acquiesce in its celebration, without a registrar’s certificate of notice or licence issued under Section 13 of this Act duly issued. Failure to comply with the provisions, therefore, makes a purported marriage null and void.

The Court of Appeal held that a valid marriage cannot be presumed to have existed between Mrs. Ifeanyi Obiozor and late Ozodinobi in the absence of any evidence that the registrar’s certificate or a minister’s license was obtained and delivered before the celebration of their marriage.

The Court of Appeal dismissed the appeal and upheld the decision of the High Court.