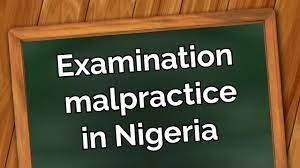 The learned trial judge of the Federal High Court, Nwaogwugwu, J., after hearing the parties held that that the allegation of examination malpractice levelled against Linda was in the nature of a criminal offence and consequently was not within the domestic jurisdiction of the two panels set up by the University of Uyo.

He granted the reliefs sought by Linda except for the special damages.

Aggrieved by the decision of the Federal High Court, the University of Uyo appealed to the Court of Appeal.

Any accusation or allegation of examination malpractice is a serious criminal charge under Section 3(16) of the Special Tribunal Miscellaneous offences Act and it is punishable with ten (10) years imprisonment. Therefore, it is not within the powers of the University. Examination Malpractice is a serious criminal charge, which can be tried only in a competent criminal Court or a Tribunal set up under the Constitution.  Under the Constitution of the Federal Republic of Nigeria, only a Court of law or a judicial Tribunal can competently hear and determine a criminal charge against students of a university. Neither the Vice-Chancellor nor any investigating panel set up by him has any competence in law to do so. Offences against the law of the land, fall outside the jurisdiction of the Vice-Chancellor. If a student in a university is charged for the commission of a crime the student can only be proved guilty before a Court or Tribunal.

The Court of Appeal, therefore, found that the judge of the Federal High Court was correct to have held that the allegation of examination malpractice levelled against the respondent was in the nature of a criminal offence and consequently was not within the domestic jurisdiction of the two panels set up by the University of Uyo.