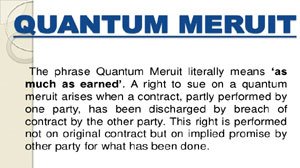 What is ‘Quantum Meruit’?
The doctrine of quantum meruit   refers to a reasonable sum of money that is equivalent to services rendered or work done when the amount due is not clearly stated in a binding contract.
In FBN v. Ozokwere (2013) 9 JMLR 17 at 28, Onnoghen, JSC (as he then was) held the doctrine to be an equitable remedy that is claimed to provide restitution for unjust enrichment. It is usually pleaded as an alternative claim in a breach of contract to enable the plaintiff recover even if the contract is unenforceable.
The phrase which translates to ‘the amount he deserves’ or ‘as much as he has earned’ will usually arise where the parties:
A. have agreed on some contractual terms but are yet to agree on a fundamental term such as price;
B. have not determined the price for the goods or services rendered;
C. have agreed to pay a reasonable sum for the goods or services; and
D. have agreed to a sphere of work under the original contract and the present work done falls under that sphere. (Thomson Reuters, 2017).
Ezinne Okere
Pro-bono Partner
+447496187493
zeerific@gmail.com