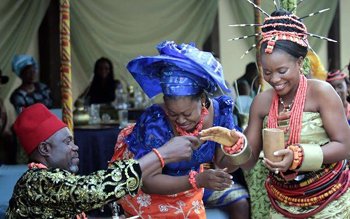 Whether Igbo native law and custom which disentitles a female whether born in or out of wedlock from sharing in her deceased father’s estate conflicts with Section 42 of the 1999 constitution of the Federal Republic of Nigeria.

Mr. Lazarus Ogbonnaya Ukeje, a native of Umuahia in Abia State died intestate in Lagos State. After he died, the 1st and 2nd appellant (mother and son) obtained letters of administration for and over the deceased’s estate. On being aware of this development, Mrs. Gladys Ada Ukeje instituted an action against Mrs. Louis Chituru Ukeje and Enyinnaya Lazarus Ukeje, who are the wife and son of the deceased, she claimed that she was the daughter of Mr. Lazarus Ukeje and as such was also entitled to the estate. She alleged that her paternity was acknowledged by the deceased in his lifetime. Mrs. Glady Ukeje challenged the grant of letters of administration to the wife and son of the deceased to her exclusion, she maintained that being a child of the deceased, the grant was discriminatory having offended Section 42 (2) of the 1999 Constitution.

Appealing against the decision of the Lagos High Court which found in favour of the claimant, the Defendants cited Igbo customary law as the basis for which she was disinherited. The Court of Appeal affirmed the ruling of the lower court. Further dissatisfied, the Appellant filed yet another appeal at the Supreme Court.

The apex court affirmed the rulings of the courts below. It invoked the provisions of Section 42(1) a & (2) of the 1999 Constitution of the Federal Republic of Nigeria and as such quashed the Igbo customary law that disentitles a female child from partaking in the sharing of her deceased father’s estate.

It further held that the Igbo native law and custom which disentitles a female from inheriting in her late father’s estate is void as it conflicts with Section 42(1) and (2) of the 1999 constitution.

The said Section 42(2) provides expressly that no citizen of Nigeria shall be subjected to any disability or deprivation merely by reason of the circumstances of his birth.