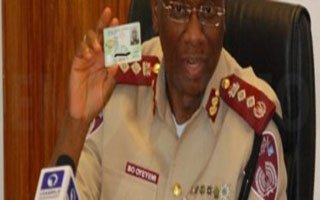 The Federal road Safety Corps (FRSC) says it will include the national identification number (NIN) in the biometric data capturing process of getting a drivers’ licence.

Speaking during the Visit, the Director General applauded the Management of the Corps for its efforts in creating a central database for all applicants nothing consonance with what is obtainable in advanced countries like the United States.
He said this will go a long way in exterminating duplication of responsibility and enhance security especially in the area of information sharing.

Responding, Boboye Oyeyemi, the Corps Marshal Congratulated NIMC for digitalizing the entire process of getting the national identity card and expressed appreciation over the request presented by the commission.
He said FRSC will ensure that henceforth, applicants of the NDL produce their NIN at registration points.
Oyeyemi stated that biometric capturing processes of various agencies in the country need to be given a uniform standard so as to align with global best practices.

He also urged Aliyu to fast – track the integration of all agencies involved in biometric capturing so as to achieve a uniform standard for the entire nation.