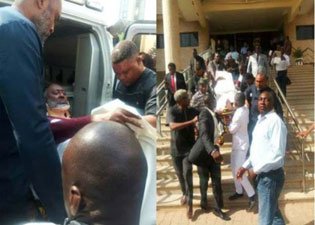 A former spokesperson of the peoples democratic party Olisa Metuh, arrived the federal High court Abuja venue of his ongoing corruption trial on a stretcher after being taken down from an ambulance.

Mr. Metuh lawyer had at the last adjourned date information the court presided by justice okon Abang that his client was at the Nnamdi Azikwe specialist hospital, for treatment on spinal cord complication.

The lawyers, led by Onyeachi Ikpeazu, asked for a long adjournment after presenting the hospital medical representative on Mr. Metuh Health conditions.

But Mr. Abang refused the Application for a long adjournment and threatened to allow the application made by the prosecution for the revocation of Mr. Metuh’s bail. If Mr. Metuh was not in court on Monday.

However, on seeing the spokesperson in court in a stretcher on Monday morning the judge adjourned the matter till March 15th.

Hired guards surrounded the PDP spokesperson preventing journalists from getting his picture on the stretcher.